Elance and vWorker (formally RentaCoder) are the two of the most popular outsourcing sites on the internet. I have used both sites for over a dozen projects, ranging from logo design, copywriting, website coding and graphic design. I’ve been satisfied every time. But which one is the best for you?

To understand which site is the best choice for you, you need to understand the inherent differences, so you can make a more informed decision on which one to choose. Let’s conduct a vWorker and elance review. 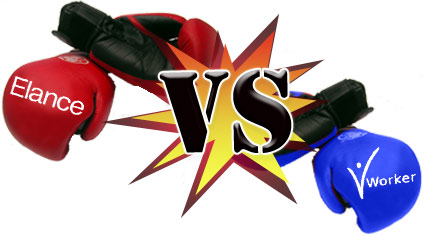 Elance and vWorker Review- Which is the Best for You?

Who is Elance and vWorker?

Both sites aim to connect people that want work done (employers) to people who have the skills to complete the work (workers). This work can range from a small logo design project for $50, to an integrated IT solution costing thousands. Elance and vWorker act as an intermediatory to connect these two parties to a job. Once an employer posts a job, workers interested in the job place bids to win the work. No bidder can see another bid.

Elance is based in the US and began in 1999. As writing, Elance has been used on over $300 million dollars worth of projects and boasts a workforce of nearly 170,000 professionals.

What Do They Cost?

The business model of both sites aims at generating revenue from workers who successfully bid for each project. Workers will pay a percentage of their earnings directly to Elance and vWorker. That means that it’s free for an employer to post jobs.

Who Wins the Popularity Contest?

I have chatted to many people about which site has the best workers. All parties have strongly pledged allegiance to workers found on both Elance and vWorker. The reality is that Elance and vWorker both have quality highly technical workers across all fields. Like any industry you will find some great workers and some mediocre workers. By doing your homework and assessing the workers who have bid on your project, you stand a very high chance of securing someone great. It’s also handy to understand that many freelance workers are on the lookout for projects from both sites.

The Elance interface is a lot more polished and user friendly than vWorker. All menus were logical, and finding the next step was always easy. Last year I even recall proposing a time clock solution to Elance and found it implemented in months. That was great. Infact the only difficulty with Elance was trying to find how to change my credit card details, which took a few minutes to figure out. I give Elance an 8/10

I found vWorker to be less intuitive than Elance. There was generally a lot of content on each page in small type, making it a bit difficult to prioritise information. Granted, all the information presented was for my benefit, but I did find it a bit overwhelming. It was also a bit difficult to determine how to perform some tasks. I remember spending 5 minutes trying to figure out how to pay a worker. I consulted help to no avail. A big ‘pay now’ button would have been great. I give vWorker a 6/10

If something goes wrong in the working relationship between an employer and a worker, you will need to seek arbitration to settle the differences. Firstly, I’ve never had to use the arbitration systems of either Elance or vWorker. However I understand that vWorker does offer more protection for employers. Elance charges between $US66-133 for arbitration, with vWorker it’s free.

It’s really up to personal preference. If you do you post a clear brief and research all the bids that respond, you’ll be in the best position to get a good result. For usability and interface I would choose Elance, but for job protection I would choose vWorker. See for yourself. Click the links below for an Elance review or a vWorker review:

Have you used either site? I’d love to hear how you went.

18 thoughts on “Elance vs vWorker Review”