Last night I watched Novak Djokovic win the final of the 2012 Australian Open. It was the longest tennis match in Australian Open history (5hr 53 minutes). Apparently the longest professional tennis match was a shade over 11 hours and was played over three consecutive days (I think they even ran out of deuce).  But anyway, the Djokovic / Nadal match was true emotional grit that had me up until about 2am. So forgive me if I wander off here… Being the marketing tragic that I am (and fan of the Gruen Transfer TV show), I focused on something that not many others may have picked up.
While all pumped up on emotion, Novak did something at the end of the tennis match which would be a cause for discipline in the football (soccer) league.
About 30 seconds after winning the match Novak ripped off his shirt before displaying a few primal screams. The crowd went wild and clapped like a bunch of bananas.
But if he did the same thing on a football field, he would have scored a yellow card because you are not allowed to remove your shirt on a football pitch. FIFA doesn’t like it. Although the rules don’t spell out why, occasionally the football powers explain it away by indicating that it could incite bad behaviour or waste time. 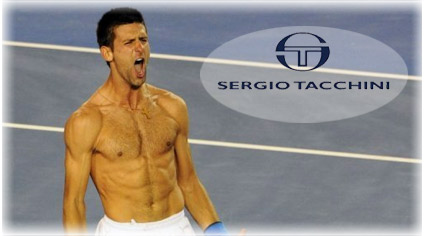 Sergio Tacchini. Here’s Some Sponsorship Exposure For You

Sounds like a load of squid’s guts to me. In fact it seems a prime example of the quote:

“There are two reasons why someone does something. The reason they say and the real reason.” Anon

FIFA’s explanation is laughable. But what could be the real reason? Enter our good friend the mighty dollar. Sport attract billions of sponsorship dollars every year as brands aim to be associated with the values and success of sporting teams. The sponsors obviously want a return for the money they spend. And this return is usually through exposure at the venue, on TV and through newspapers/magazines. All those little glimpses of sponsor logos combine to become recognised, understood and considered at a later more relevant time.
And when are these glimpses of the sponsorship logos the most important? When players score a goal and the cameras zoom in. Those photos could be on the front page of the newspaper, giving mass exposure to the visible sponsors. That’s when the sponsors logos work their hardest. And when they make the sponsorship executives smile the most.
That’s why football players get penalised for removing their shirts. It reduces the return on investment of the team sponsors.
The shirtless image of Novak Djokovic was reprinted across the World, sometimes even on the front page. As a result his primary sponsor Sergio Tacchini missed out on extensive exposure. Bummer, considering all the money they must pay. But Novak must have been hot after all that tennis.
Growing your small business,
David Moloney
Small Business Planned